Calculate your ovulation day and GET PREGNANT! ✓

Stress and other factors can result in more phases with more thin cervical mucus. If ovulation has already occurred, you can only then determine this in retrospect on the basis of higher temperature measurements.

The time around ovulation is the only time during the menstrual cycle when a woman can become pregnant. Thus, it makes sense for a couple trying to have children to know when this occurs.

In addition, several other methods are explained below, which will help you track your ovulation, i.e. your fertile time window.

Method 1 - Use our ovulation calculator widget

Use our ovulation calculator

For women who have a normal 28 to 32 day menstrual cycle, ovulation can take place anytime between day 11 and day 21. Remember this is just an average — every woman’s cycle is different!

Try the calculator now to get an idea of your ovulation time window this month. Keep in mind that this is just a very rough statistical approximation and the exact day needs to be confirmed with the other below techniques.

Why is this information useful?

After ovulation, the female body releases a hormone called progesterone. Its role in the body is to ensure that there is a good blood supply to the uterus in order to successfully maintain a possible pregnancy. A side effect of progesterone is that it causes body temperature to increase by as much as 0.6°C1. Body temperature remains at this level until the start of menstruation, and subsequently drops. Women can make use of this information to determine when they ovulate.

You should follow these five rules in order to determine your fertile days accurately via body temperature: 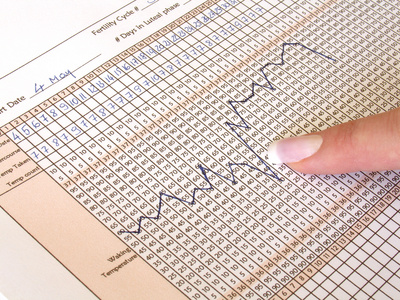 After measuring your temperature note down the value in a list or as a point on a graph. Also make a note of any irregularities that occur: less sleep, illness, stress, medication and alcohol on the day before the temperature measurement.

This is because the basal body temperature will be influenced by many factors. Join up the individual points on the graph. If you have missed out a measurement, leave a gap for that day.

Because the temperature measurements at the beginning of the cycle sometimes vary drastically, you can ignore the first four values in your analysis.

Now examine the values from the low temperature phase after the fifth day. For a better overview, you can draw a horizontal line directly above the highest values (excluding outliers).
Then check whether there is a sudden rise in temperature of at least 0.2°C in the low values of the first half of the cycle. The rise should occur within the space of two days.

If the temperature is higher than the value in the low temperature phase on at least three consecutive days, you can assume that ovulation took place in the 48 hours before the rise in temperature.

After the fertile days

The second half of the cycle usually lasts from day 12 to 16. This can help you when interpreting your temperature curve. The rise in temperature should occur around two weeks before the onset of menstruation for the following month.

There are many variations between temperature curves and one rarely corresponds to the ideal shape. Also small variations can complicate the interpretation of the curve. However, when you have monitored your basal temperature for a few months, you will have had more practice at analysing the temperature. This means that you can accurately forecast your fertile days after a few cycles.

From the experiences of previous cycles you can also reach conclusions for the following months. This can narrow down the period of time during which ovulation may occur. For very irregular cycles, this may be difficult.

Different phenomena can be observed when determining fertile days using the temperature curve:

Above all, if your period is late or the bleeding is considerably lighter than usual, it may be a possible indication that you are pregnant. Other factors can also be responsible for the constantly raised temperature, such as febrile illnesses.

While ovulation can be identified retrospectively on the basis of raised basal body temperature, the consistency and appearance of cervical mucus indicates impending ovulation2.

This is because in the fertile phase the uterine cervix produces especially runny secretions in order to facilitate the route of the sperm in the uterus. Women usually produce so much cervical mucus that they primarily discover it during their fertile phase when they clean with toilet paper.

Because ovulation is ultimately triggered by another hormone, luteinising hormone (LH), high mucus secretion is not absolute proof of ovulation. Therefore it is recommended to judge whether ovulation has occurred through a combination of the examination of cervical mucus and the temperature measurements. On the temperature graph the consistency of the secretion can be noted on a daily basis.

Usually, a woman needs a few months in order to accurately interpret the consistency of the cervical mucus. However after this, observations and experience can give a good indication of when the fertile phase occurs.

Stress and other factors can result in more phases with more thin cervical mucus. If ovulation has already occurred, you can only then determine this in retrospect on the basis of higher temperature measurements.

Examination of the cervix

Women who produce less cervical mucus can regularly feel the neck of their uterus and their cervix in order to determine when their fertile phase occurs. The cervix, which protrudes from the uterus into the vagina, opens around the time of ovulation. This creates an optimum condition for the sperm to penetrate.

During the infertile phase at the beginning of the cycle and after ovulation, the cervix lies deeply in the vagina. By using two fingers in a squatting or standing position, it can be felt easily. In this case it is relatively hard and closed.

In the days around ovulation the neck of the uterus and the cervix lie in a higher position. It is more difficult to feel them at this time using your fingers. The cervix opens, which is felt as a small dimple/pit, or a slit on the spherical structures. It also feels very soft.

The examination should be started at the end of menstruation. The position, the finger used and the time should ideally be kept the same throughout the whole cycle.

Important tip: wash your hands thoroughly before the examination, to avoid infections. Also if you empty your bladder first it is easier to feel the cervix.

The level of the hormone LH (luteinising hormone) rises sharply at the end of the first half of the cycle, triggering ovulation. When the level of LH reaches its maximum, it indicates that it is around one day until ovulation occurs.

Test strips function on the same principle as pregnancy tests. Most ovulation sticks need to be kept in a woman’s urine for a short amount of time. After a few minutes, a control strip becomes visible. If the LH value is high, two lines will be shown.

The tests usually indicate when a woman is highly fertile. In this case, the intensity of the strip indicating the LH level will be at least as strong as the control strip. Since all ovulation tests work a little differently, you should carefully follow the manufacturer’s instructions.

When you know your body through the use of the temperature method and inspecting cervical mucus, you can identified possible ovulation dates. The test can be used over these few dates to confirm fertility.

An ovulation test specifically for women who have a very irregular cycle is particularly useful. This is because the temperature method only gives you a result that ovulation has occurred when the fertile phase has already passed.

Unfortunately in this case a lot of test strips are needed. You should start with the control around two days before your earliest possible ovulation date, and continue this until the observed LH surge. 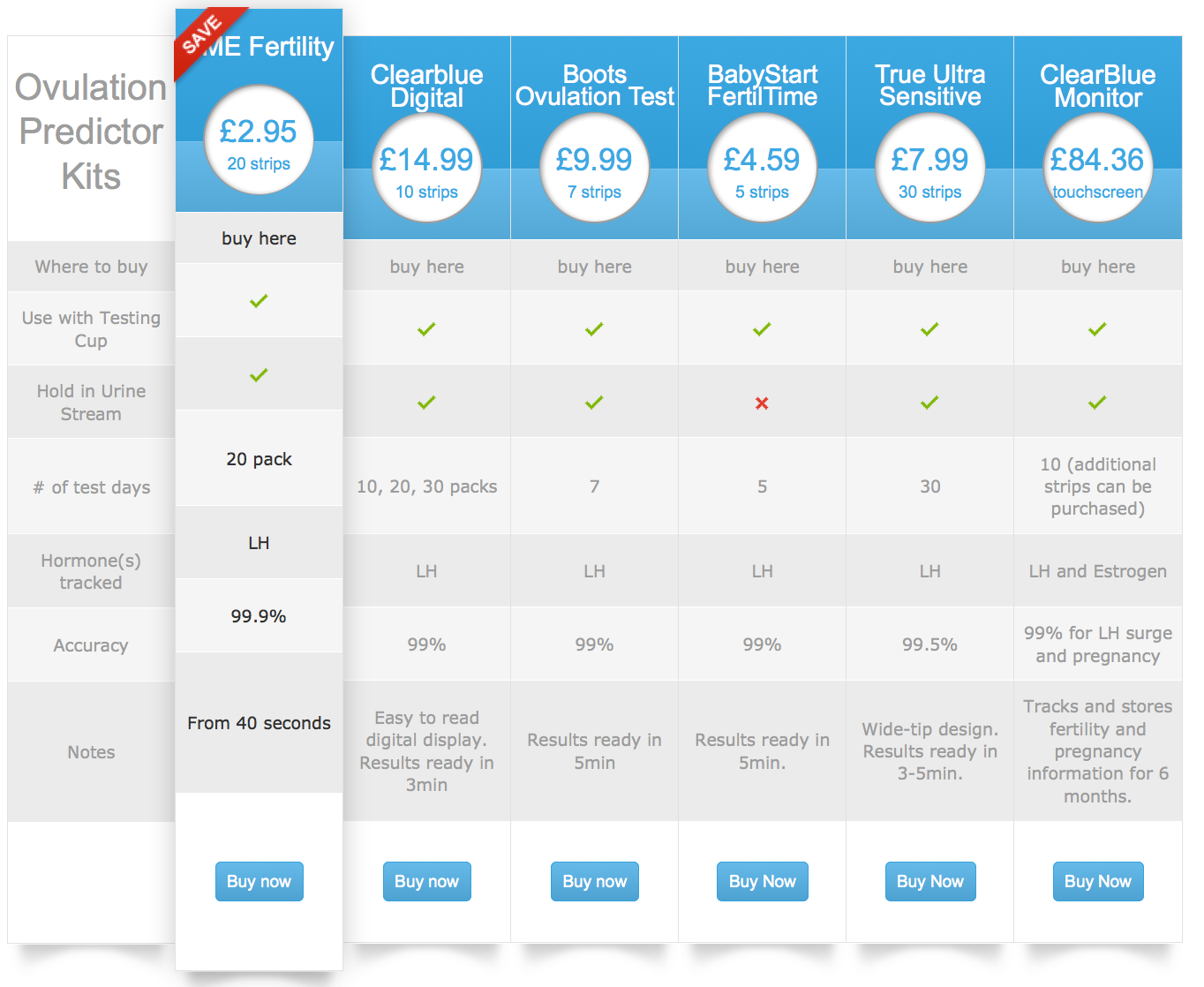 A cycle computer can be very useful in determining the fertile phase. The cycle computer uses exactly the same features for this – temperature2, LH-surge as well as progesterone-surge

The advantage of using a cycle computer is that it can process the dates itself. Constructing the graph and analysing the values is already done for you.

The cycle computer is a useful addition in family planning. It can help identify the fertile phase for a couple trying to have a child.

buy it on amazon

Last, but certainly not least there is a huge amount of fertility smartphone apps available for iPhone and Android.

These apps help women track their periods and health related issues – such as their weight and emotional and physical well being.

Women can be sent reminders of their most fertile days and usually everything is organised in an easy and stylish calendar.

Many apps come free and some offer extra features if you pay for the Premium version. 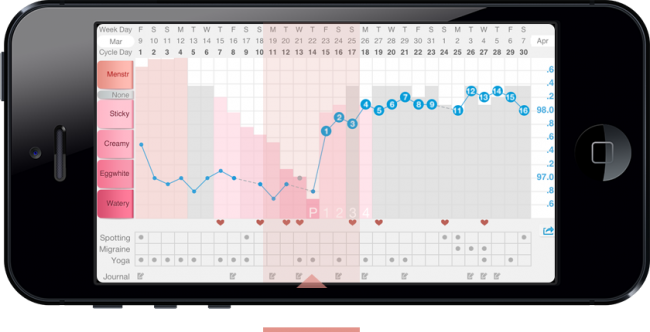 Get the free app or pay for premium features?

As discussed in the video above, the following BMS strategy will allow you to maximise your chances of getting pregnant each month:

Having frequent intercourse around the day of ovulation will allow for plenty of sperm to be present. This strategy maximises the chances that one sperm cell will reach the egg and fertilise it.

But this is not all:

Once the egg has been fertilised, it needs to implant itself in the uterus. For this to happen, numerous hormonal changes must successfully take place inside the female body. Also, numerous nutrients such as iron, folic acid and fatty acids must be present to enable the body to build a nutritious “nest” for the egg. Please continue by reading our dedicated article:

Boost your chances further! Make sure your partner can take his best shot.

We have compared the most popular natural male fertility supplements.

Which partner is more likely to suffer from infertility in infertile couples?

Click to browse our directory of fertility specialists to find the one that is right for you.

By continuing to use the site, you agree to the use of cookies. more information